If you follow us, you know we sold a calendar called "Libre Calendar", in end 2014, with 5 great artists. 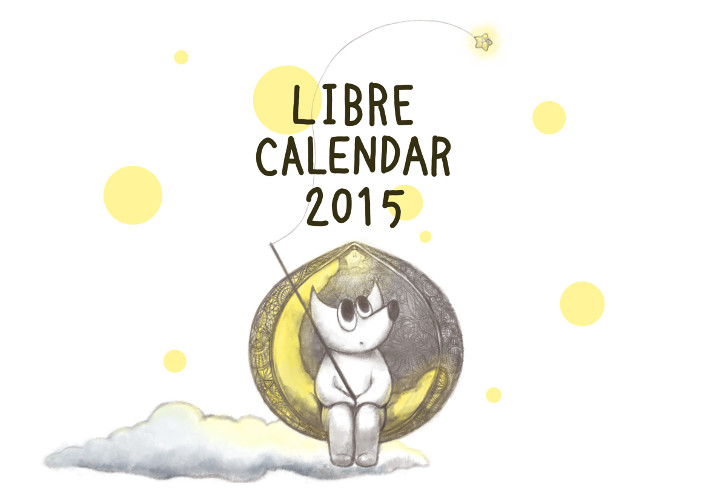 Also we announce a small survey. We'd love it if you can answer: post-mortem survey of the Libre Calendar 2015.

By the way, after all necessary resent calendars, we still have 6 calendars. If anyone still wish one, don't hesitate to contact us to buy one! The donation accounts for Free Software projects are close, so this money will go directly into the association activities.

The price could vary, a lot of people paid the minimum 15 €, but quite a few paid more, sometimes up to 30 €. What really amazed us was a special donation of 390 € for a single calendar! This generous donator chose to stay anonymous (he told us he sometimes send patch for some graphics Free Software, that's all you'll know about him).

In the end people donated an average of 22 € (17,5 € if you remove the super-donator whose extra donation really breaks numbers). They came from 16 countries of the world, mostly France (23 donators), not astonishing since LILA is a French association, and though we tried to promote internationally, clearly our French actions are better targetted. Other donators came from Europe (Germany, Belgium, Spain, Italy, Netherland, Poland, Czech Republic, United Kingdom, Switzerland), North America (Canada and USA), South America (Brazil), Asia (South Korea), and Oceania (Australia and New Zealand). No need for detailed numbers since this was not a competition; we are just proud to point out it was quite an international effort. :-)

And now for some more numbers! We raised 1766 €. Fees were the following:

As planned, the files are available under a Creative Common Attribution 4.0 International license (version 3.0 for the 2 images provided by the Blender Foundation).

You can get them all in high resolution at http://download.tuxfamily.org/librecal2015/highres

The finale calendar is available in PDF here (138 M). You can get a version with bleed too: the cover (25M) and the inside (114M) if you ever wanted to send it to a printshop. A smaller version is also available for the computer (still 33.5M).

To have a look at the Scribus file, download the archive with the layout and all dependencies (all the images, etc.).

Finally you can also get the super script which allowed us to easily generate dates on Inkscape before importing them into Scribus. This script was provided by Martin Owens, his original script being available on his blog though he provided us with a more recent version, which we also modified. Maybe we'll write a small tutorial for those who want to make their own calendar and can't figure out how it worked.

Images speak for themselves, yet I wanted to add a few words for each.

Where is Wilber? by Aryeom Han (January)
You probably guessed the reference, but what you may not have immediately guessed is that there is not only Wilber to find in this drawing made entirely in GIMP. Some other mascots from the FLOSS world are having fun on this ski resort. You may find Firefox, Thunderbird (Mozilla), Konqi (from the KDE project), Tux (Linux) GNU (Free Software Foundation), icedove (the Debian fork of Thunderbird), Puffy (OpenBSD), Suzanne (Blender) and you can even find proof of GNOME passage… Funny thing for these who know a little people behind GIMP, a dozen of actual GIMP contributors (developers, but also designers like Jimmac, and tutorial wizards like Patrick David…) are visible there too! A very Librist ski resort, right?!
Frame 11675 of "*Sintel*", Fondation Blender (February)
It was harder to find an image from Blender Open Movies than we thought, first because the first movies were not using a large enough resolution for a printed project. For instance, we really love the visuals of Elephant Dream, the first Blender Foundation's movie, but it turned out that its max rendering resolution was 1920x1080, which is very low for the expected quality of a printing. Of course we could have tried but we did not want to take the risk of a very low quality page. So we finally used a frame from Sintel, which is nice and we like, but honestly I don't like it as much visually as I liked Elephant Dream (of course that's just personal opinion).
Landscape n°5, Henri Hebeisen (March)
A new render of Henri, of his serie "abstract landscape" unpublished until now because it had been done specifically for us. For full disclosure, know that this image took 8 hours of rendering!
Words Escape Me, Brian Beck (April)
An already published image which Brian reformated in A4. The poem surrounding the reader is also written by Brian, and is called "Who is This?".
Blender Conference 2014 promo graphic, Andy Goralczyk (Mai)
A crop of one of the 2 banners used for the Blender Conference 2014. Therefore this was not exclusive for the calendar, but Ton Roosendaal told us it had been unpublished in high resolution yet (at least back in October, not sure about now) and we thought it was a pretty cool and cute character.
The Last Whales, Henri Hebeisen (Juin)
Henri was working on these robotic whales for some time now. So when we proposed him to participate to the calendar event, he thought it was the right opportunity to finish this artwork! :-)
Chemins du Nord, Gustavo Deveze (Juillet)
Gustavo lives in Argentina, in the south hemisphere. One of the most obvious consequences, and yet nobody ever thinks about it unless they live there too, is that they have reverse seasons to most of the planet. So when it is summer in Europe for instance, it is winter for Gustavo, and reciprocally. Some of us, in LILA, lived in New Zealand, so we know about this too. This is why Gustavo had this nice idea of reverse his drawings, and he chose this one, with cold colors as his winter drawing… in July.
Fishing Night, Aryeom Han (Août)
A very nice and poetic Wilber fishing on a cloud. You'll notice 15 fishes, because we are in 2015. :-)
The Lady in the Roses, Brian Beck (Septembre)
Another photograph from Brian Beck, previously published too, that we chose together and that Brian reformated in A4.
Perchance to Dream, Patrick David (October)
Well this one is clearly the scariest picture in the whole calendar, and "spooky" was definitely the point that Patrick told he wanted. At first we were not sure why October had to be scary. But actually we remembered that this was the month of Halloween, a huge event in the US (at least from what we see in movies). Well it is coming in Europe too, with commercial lobbies, but this is still not as traditional an event as it is in America. And this is why, for Americans, October is supposed to be a scary month. Well another interesting culture choc, right?! :-)
(USS Alabama) Little Planet, Patric David (November)
Patrick proposed several "planets" of this military ship, that he made specifically for the calendar. They were all very cool, some collages were made looking like "eyes", but this one, with its huge canon, was highly intriguing, and this is why we went with it. Patrick also explains that several official observances in the US related to historical war events happen in November. Well in France we have the armistice day too, and in various other countries. Well that is why the "first World War" is named this way, after all, isn't it?
Chimère des Fleurs, Gustavo Deveze (Décembre)
Again in continuity of climate being opposite in North and South hemisphere, this hot-colored illustration illustrates December, since in Argentina, this is the start of summer!
Intellectual Pooperty, Nina Paley

We concluded by a very funny strip, that is part of the calendar's conclusion, illustrating our opinion on the world "Arts and Entertainment Industry" nowadays. It was not part of the "months", just an add-on. Interesting thing is that Nina Paley really promote a very sane Arts world, and even went further than most copyleft licenses and Creative Commons, by promoting the Copy Heart license:

♡ Copying art is an act of love.

If everyone agreed, our world would be a much nicer place!

Calendars are usually very national since people like to know which are national holidays and observances, and such.

Yet since we wanted to be as international as possible, we pondered for quite some time what we'd put inside the calendar. Also we definitely think that multi-cultures and languages are an important thing, and I told every artists that at least their artwork' s titles should be in the language of their choices (funnily they all chose English titles though, even when non English-natives, except Gustavo who chose French title, which is also very funny that he did not name his illustrations in Spanish. But he turned out to speak very fluent French too).

In the end, after testing various date possibilities (in particular we really wanted to not break the design too much by having too many dates filled), we went for a mix of language and dates for all the 16 countries where we had buyers. Now we got the names and list of dates on Internet and maybe we got some error here and there, though I hope not. If we did, sorry for this.

Actually we forgot some dates for sure, I think from the time we were fiddling with the list at the start. After the print, I noticed we skipped at least 3 French observances in May (sorry for this all living in France!). Also we added the Libre Graphics Meeting, from April 30 to May 2, but it appears it started the 29th.

The text in the end still is full English because a choice had to be made (not enough place to duplicate in 16 languages there!), and English is the de-facto world communication language.

Finally we added a special event for GIMP. On 21th of November 1995, Peter Mattis announced for the first time ever "GIMP" to the world with this name (though there was a the in front at the time). Which means that this year in November, GIMP will be 20 year old, which was an age round enough (if you count on base 10 at least) for us to decide to make it a special icon on our calendar. We would have done the same for any of the other donation targets, but this was the only one with a round birthday. Oh by the way, you can also find this special date on "Where is Wilber" mail in Aryeom's January artwork! :-)

We learnt quite a bit with this event. Of course the intermediaries take the lion's share, as always. Yet it was a conscious choice to go with a physical object. Though we are more and more connected everyday, all in digital, we think that the physical world still has its place. And well working in graphics, of course that computers now hold a major role, but we still appreciate a good book or comic, don't you? So we spent quite some time to find a printshop whose prices were not too high.

Next time though, maybe some other objects may be a better idea rather than a calendar? Maybe posters ou postcards? What do you think? Ideas?

As for the number of donators, 70 is ok, but honestly we were hoping at least the double. On the other side though, we were not perfectly organized, thus we also feared worse. For full disclosure, we got this idea about 2 weeks before November, so this was all done in quite a rush. Therefore the result is acceptable. Next year we'll prepare much in advance and do better!

Another point we thought may have been a mistake was to choose 4 donation targets. This considerably diluted the donation to each software. If Patrick hadn't given his share, GIMP, Inkscape & Scribus would have got only 35 € each. Of course it is nice to give to more projects but less efficient. Next time, we may do a smaller selection.

Finally don't forget to answer our small survey. This will help us improve for the next time. Thanks!